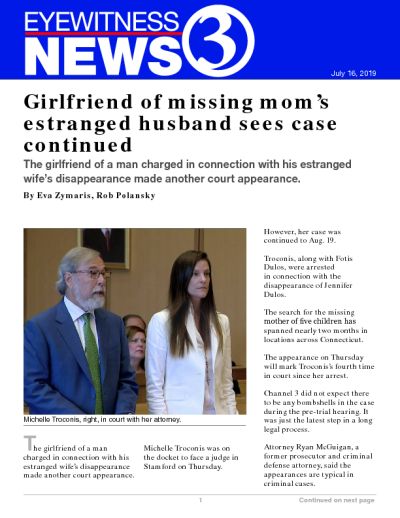 The girlfriend of a man charged in connection with his estranged wife's disappearance made another court appearance.

Michelle Troconis was on the docket to face a judge in Stamford on Thursday.

However, her case was continued to Aug. 19.

Troconis, along with Fotis Dulos, were arrested in connection with the disappearance of Jennifer Dulos.

The search for the missing mother of five children has spanned nearly two months in locations across Connecticut.

The appearance on Thursday will mark Troconis's fourth time in court since her arrest.

Channel 3 did not expect there to be any bombshells in the case during the pre-trial hearing. It was just the latest step in a long legal process.

"There's still an investigation, obviously, that is being conducted, you're going to see a lot of requests for continuances," McGuigan said.

McGuigan said court appearances allow prosecutors and defense attorneys to update each other on the case, including sharing evidence. They also provide the chance to negotiate a possible plea deal.

"Those negotiations would be, would have already taken place, but we wouldn't know about those until you actually have a resolution before court," McGuigan said.

Troconis and Fotis Dulos pleaded "not guilty" to hindering prosecution and tampering with evidence charges.

During her last appearance, a judge granted her request to travel out of state and upheld a ban the prevented the two defendants from having any contact with each other.

Thursday, however, court officials revealed that she only went to New York for a day but had to return because her GPS monitor was not properly working.

Nothing else happened in court.

While Fotis Dulos isn't due in court until August, his legal team has been working to debunk rumors and speculation that he had anything to do with Jennifer Dulos' disappearance.

A new motion requested copies of his estranged wife's lab work, treatment and other medical tests.

Attorney Norm Pattis said he needs the medical information as he prepares his defense that Jennifer Dulos may have had a "reason" to disappear.