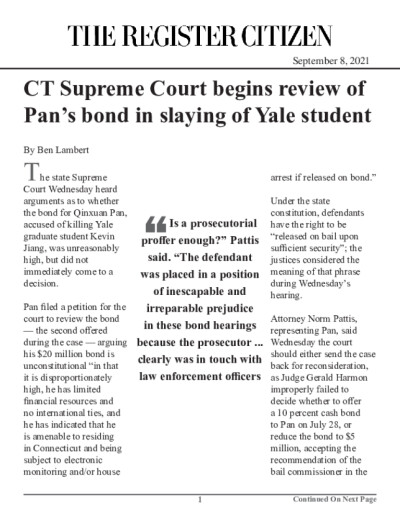 The state Supreme Court Wednesday heard arguments as to whether the bond for Qinxuan Pan, accused of killing Yale graduate student Kevin Jiang, was unreasonably high, but did not immediately come to a decision.

Pan filed a petition for the court to review the bond — the second offered during the case — arguing his $20 million bond is unconstitutional “in that it is disproportionately high, he has limited financial resources and no international ties, and he has indicated that he is amenable to residing in Connecticut and being subject to electronic monitoring and/or house arrest if released on bond.”

Under the state constitution, defendants have the right to be “released on bail upon sufficient security”; the justices considered the meaning of that phrase during Wednesday’s hearing.

Attorney Norm Pattis, representing Pan, said Wednesday the court should either send the case back for reconsideration, as Judge Gerald Harmon improperly failed to decide whether to offer a 10 percent cash bond to Pan on July 28, or reduce the bond to $5 million, accepting the recommendation of the bail commissioner in the case.

The state offered a series of assertions before Judge Brian Fischer, who initially set the bond at Pan’s arraignment, Pattis said. He said some of them, such as Pan’s financial wherewithal, were based on “innuendo and anecdote,” not evidence.

The state, by offering such accusations without evidence to Fischer, indirectly had denied Pan the possibility of bail, he said.

“Is a prosecutorial proffer enough?” Pattis said. “The defendant was placed in a position of inescapable and irreparable prejudice in these bond hearings because the prosecutor ... clearly was in touch with law enforcement officers throughout the United States and was free to pick and choose ... data she was given.”

Pattis noted the case of Peter Manfredonia, accused of two killings, kidnapping, home invasion and other crimes, in which bond initially was set at $5 million.

“The Pan family wonders whether this is Yale, the shadow of Yale, cast on the criminal courts,” said Pattis. “Every case involving Yale seems to acquire a special gravitas.”

Senior Assistant U.S. Attorney Timothy Sugrue argued that the court should uphold the bond, which he said took into account the totality of factors, including nature of the alleged crime, the likelihood of flight and the possibility of harm coming to the community, as well as Pan’s alleged resources.

Jiang’s fiancee, Zion Perry, was the only apparent link between Jiang and Pan, he noted, and a protective order was issued in the case; a firearm allegedly discarded by Pan was tied to four other instances of shots fired in the area.

The state is obligated to offer some bond to the defendant, he said, but in this case, believes there is no amount that can reasonably assure he will reappear in court if released from custody.

The justices asked a series of questions of Pattis and Sugure as they grappled with the case.

Justice Steven Ecker, noting that neither the prosecution nor defense had offered evidence to support their assertions in the two prior bond hearings, questioned whether an evidentiary hearing should have been held; Pattis concurred with the idea.

Justice Gregory D’Auria asked from where the $20 million figure had come. Although Fischer had shared his general rationale, he noted, a dollar amount was not specifically tied to any factor. Given that, he asked, would $500 million have been reasonable?

“I don’t know what a judge is supposed to do under the circumstances (that) you don’t have any useful financial information,” said D’Auria. “It sounds like you’re pulling a number out of the air.”

Sugure said, in the state’s view, “sufficient security” encompassed the series of factors at hand beyond the defendant’s financial resources. The trial court cannot intentionally act to deny bail, he said, but can set a bond that is too high for the defendant to pay.

Justice Christine Keller and Justice Andrew McDonald asked whether the state should require judges to more expressly state their reasoning for a specific bond, as is done in other states, and/or rely solely on evidence at arraignment.

Sugure said those sort of steps would prompt practical concerns, given the volume of cases moving through the system. In an ideal world, judges would rely solely on evidence, but systemic realities apply as well, he said.

After the justices had exhausted their questions, Chief Justice Richard Robinson, noting the complexity of the case, adjourned proceedings for the day.

William Gerace, Pan’s attorney, filed the initial motion for Pan’s bail to be reviewed in June. He has said the $20 million bond, believed to be a record in the state, is too high to be reasonable — an amount “tantamount to no bond at all.”

In response to that initial motion, the state Supreme Court ordered Fischer, who set the bond, to articulate his reasoning or hold a hearing to establish the evidence on which he based it.

Fischer did so by the court’s July 15 deadline, citing Pan’s flight from the area in February after the killing, which prompted a nationwide manhunt; the slaying itself; Pan’s financial resources; his use of a false name; his connection to China; and the likelihood that he would flee the country, among other factors.

Harmon then affirmed Pan’s bond at $20 million on July 28, saying he also believed Pan was an acute flight risk, among other factors. Fischer’s choice of bail was “appropriate,” he said.

In their announcement, judicial branch officials noted Harmon cited the “seriousness of the charged crime, the strength of the state’s case, the defendant’s lack of ties to Connecticut, his flight and his family’s assistance therewith, the $19,000 in cash found with him during his apprehension, and his mental health,” among other factors.

Jiang was shot to death on Lawrence Street in the city’s East Rock neighborhood Feb. 6.

Those who knew Jiang have described him as a person of faith and energy, including his parents, speaking during his funeral at Trinity Baptist Church in New Haven.

City police obtained a warrant charging Pan with Jiang’s slaying in late February. The department had named him as a person of interest in the case Feb. 10.

Pan, formerly a graduate student at the Massachusetts Institute of Technology, was not arrested until May 13 in Montgomery, Ala., following a search by U.S. marshals and others.

Perry, Jiang’s fiancee, also attended MIT as an undergraduate student, graduating in 2020 with a degree in biological engineering.

Pan was living in Malden, Mass., on the day he allegedly drove to New Haven and killed Jiang.

Affidavit: The guns, cars and DNA that led police to arrest Qinxuan Pan in slaying of Yale grad student.