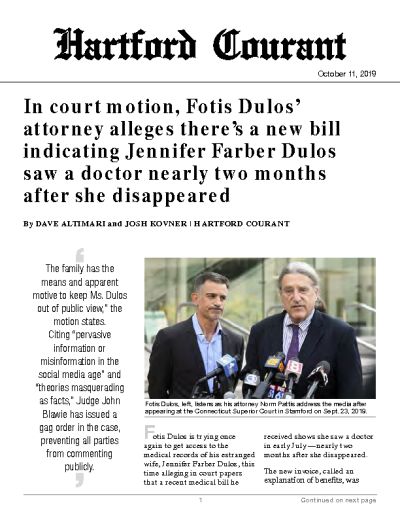 Fotis Dulos is trying once again to get access to the medical records of his estranged wife, Jennifer Farber Dulos, this time alleging in court papers that a recent medical bill he received shows she saw a doctor in early July — nearly two months after she disappeared.

The new invoice, called an explanation of benefits, was from the same New York City medical group that is seeking payment of more than $300 from Dulos’ insurance provider. A motion, filed in Superior Court in Stamford on Friday by Dulos’ lawyer, Norm Pattis, requests a court order directing Anthem Blue Cross to turn over copies of all medical records for Farber Dulos, 51, of New Canaan.

In a wide-ranging investigation and search since she disappeared on May 24, police have been unable to locate Farber Dulos. State police say that Dulos, 52, a Farmington real estate developer, is responsible for her disappearance.

“If Ms. Dulos herself did, as the bill suggests, receive medical services on July 7, 2019, she is obviously alive, if not necessarily well,” the motion, written by Pattis, states. “Among the hypotheses the defendant is evaluating in his defense is that Ms. Dulos and/or her family have orchestrated an apparent disappearance to resolve a contentious divorce and custody proceeding that was not breaking Ms. Dulos’ way.”

In the motion, Pattis said that that Farber Dulos was receiving an allowance of $160,000 per month from her mother and paying as much as $70,000 per month to lawyers in legal fees to her divorce lawyers.

“The family has the means and apparent motive to keep Ms. Dulos out of public view,” the motion states.

Citing “pervasive information or misinformation in the social media age” and “theories masquerading as facts,” Judge John Blawie has issued a gag order in the case, preventing all parties from commenting publicly.

Farber Dulos was last seen on a neighbor’s home security camera returning to her New Canaan home on the morning of May 24 after dropping her five children off at a private school.

Her Chevy Suburban is seen on the same surveillance camera leaving at about 10:30 that morning. State police have alleged in an arrest warrant affidavit that Dulos was driving the car at that point and was “believed to be” carrying her dead body.

Police found Farber Dulos’ vehicle about three miles from her home on Lapham Road, near where school bus cameras show a red Toyota truck was parked earlier that morning. State police say that Dulos drove the red truck from Farmington to New Canaan that morning and drove it again when he returned later to Farmington.

Dulos has been arrested twice since June 1 in connection with Farber Dulos’ disappearance. He has pleaded not guilty to tampering with evidence and hindering prosecution charges. He is free after posting two $500,000 bonds.

This is the third time that Dulos and his lawyers have sought access to Farber Dulos’ medical records. A judge rejected the other bids ruling the requests were “speculative” and that Pattis’ argument hadn’t shown enough basis to grant the motion. The judge did say he would revisit the issue if Pattis produced more compelling evidence.

Pattis already had possession of billing records that show Farber Dulos had $14,000 worth of tests, blood work and other diagnostic treatment from February through April of this year.

Pattis said they want to review the medical records so they can evaluate whether “Ms. Dulos, alarmed by her diagnosis and fearing that she might not be able to raise the children on her own, took steps to cause her own disappearance in such a way as to raise suspicions about Mr. Dulos.”

In a previous motion Pattis said the billing records and coding are consistent with pregnancy testing, as well as testing that would have been required before treating for life-threatening or terminal illnesses that would require chemotherapy, radiation, and other similarly toxic treatments.”

Her friends and family have released statements criticizing Pattis for seeking the medical records, calling it “yet another desperate attempt to distract from the charges against his client.”

They said “Jennifer has always taken excellent care of her health" and that the tests were just routine.

Pattis has sought to fight the police case against Dulos by suggesting that Farber Dulos may have staged her own disappearance in a plot similar to Gillian Flynn’s 2012 novel “Gone Girl,” in which a wife pretends to vanish to frame her husband for murder.

He also has said that Farber Dulos may have engaged in a form of “revenge suicide” after receiving alarming medical news and suffering reversals in the couple’s bitter divorce and custody battle.

Dulos has been under intense media scrutiny since Farber Dulos disappeared. The attention increased when state police arrested and charged Dulos and his girlfriend Michelle Troconis on June 1 with hindering prosecution and tampering with evidence charges.

Both of them were arrested again last month on tampering with evidence charges. Troconis has also posted two bonds of $500,000 and $100,000, and is currently also free and wearing a GPS monitor.

In the most recent arrest in September, authorities released a 43-page arrest warrant affidavit that said police obtained surveillance videos that showed a red Toyota truck that state police said Dulos was driving coming and going from Farmington to New Canaan on the morning of May 24.

The affidavit quotes Troconis as saying that afternoon she saw Dulos at a Mountain Spring Road home his company owns cleaning a “coffee spill” out of the front seat of the Toyota. She said he handed her the towel and that it didn’t smell like coffee.

A few days later, Dulos took the truck to a car wash in Avon and paid $250 cash to have it washed and detailed. The affidavit said Dulos also encouraged the owner of the Toyota truck to sell it or to at least replace the front seats. The man did replace the seats but didn’t throw them out instead keeping them and turning the over to state police.

Police said that they found Farber Dulos’ blood in the truck.

Court records said the cellphones of Dulos and Troconis pinged on Albany Avenue in Hartford at almost the same time Farber Dulos was reported missing to New Canaan police by her friends.

State police later recovered some of the items that had been thrown away, including a Vineyard Vines shirt they believe Farber Dulos was wearing the day she went missing. DNA testing showed the blood belonged to Farber Dulos.

The man also was seen dropping a Fed Ex envelope into a storm drain in front of Scott’s Jamaican Bakery. A woman who state police said looks like Troconis can be seen getting out of the passenger side of a vehicle and picking something up off the ground just before the man walks over in front of her door and drops the package into the drain.