Police said he tried to take his own life at his Farmington home. 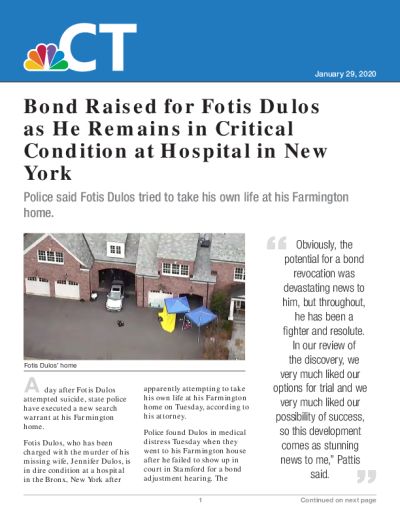 Fotis Dulos, the estranged husband of Jennifer Dulos, who has been missing for eight months, is in critical condition at a hospital in the Bronx, New York after apparently attempting to take his own life at his Farmington home on Tuesday.

A close source to the case said Fotis Dulos remains in intensive care.

Farmington police said they responded to Dulos' home on Jefferson Crossing just before noon on Tuesday to check on him after he failed to arrive for a bond adjustment hearing in Stamford.

Through the windows, officers saw him in a vehicle in the garage and he was in medical distress. When Dulos was transported to UConn John Dempsey Hospital in Farmington he was in critical condition, police said.

From the UConn medical facility, Dulos was flown to Jacobi Medical Center in the Bronx, New York for further treatment for carbon monoxide poisoning.

Dulos' attorney, Norm Pattis, said he understood that Dulos would be placed in a hyperbaric chamber at the Jacobi Medical Center.

According to the hospital's website, Jacobi has treated more than 3,000 patients for carbon monoxide poisoning, more than any other hospital in the country.

According to Dulos' attorney, the court appearance he was expected for was an emergency hearing to address questions about the $6 million bond in the criminal case.

The bonding company has filed to rescind the $6 million bond over technicalities and the hearing has been moved to today.

Pattis said he was in Washington, DC on Tuesday for another case when he received word that there would be an emergency bond hearing and they were ordered to appear in court at noon.

"When Mr. Dulos did not arrive in court at noon, his GPS device was tracked and it determined he was in his home," Pattis said. "Officers arrived and found him non-responsive in his garage."

Fotis Dulos has been charged with murder, commission of felony murder, kidnapping in the first-degree, hindering prosecution in the first degree and two counts of tampering with physical evidence in connection with the disappearance of Jennifer. He has pleaded not guilty to the charges.

Pattis said the last time he spoke with his client, he had been determined to fight the charges.

Pattis said he has represented people for more than 30 years and "not once did it ever occur to me that he might be a risk of suicide."

Not once did it ever occur to me that he might be a risk of suicide.

Fotis Dulos' civil attorney, Rich Rochlin, also said he was shocked by his client attempting to take his own life.

“It's sad to see that somebody you spend so much time with who is always fighting for his kids and someone who maintained his innocence decided that the pain was too great and that's a hard thing to process, frankly,” Rochlin said.

Carrie Luft, a spokesperson for Jennifer Dulos' family and friends, declined to comment on the situation.

Officers remain at Dulos' Farmington home on Wednesday, a crime scene van was parked in front and police cruisers are in the back.

Fotis Dulos had been on house arrest after posting bond for the most recent charges.

The Disappearance of Jennifer Dulos

Jennifer Dulos, a mother of five, has been missing since May 24. The last sighting of her was when she dropped her children off at school in New Canaan that morning.

Officers who went to her home to investigate the missing person case found bloodstains on the garage floor and on a vehicle in the garage, which led them to believe the home was a crime scene, according to an arrest warrant. They said there was also evidence of attempts to clean it up.

Dulos and Jennifer Dulos, were going through a divorce and child custody proceedings when she disappeared.

See the timeline of the case here.

When Fotis appeared in court last week, the judge changed the conditions of his release to strict house arrest after prosecutors filed a motion saying Dulos violated terms of his release by getting out of his car and removing items from a memorial for Jennifer.

Pattis said last week that he was disappointed in the decision.

Pattis also said there is no evidence that Jennifer is deceased.

"I remind the supporters, Jennifer is missing. She may be presumed dead as far as they're concerned, we've yet to see persuasive evidence of that," Pattis said.

Fotis Dulos’ girlfriend, Michelle Troconis, and his friend, attorney Kent Mawhinney, have are both been charged with conspiracy to commit murder.