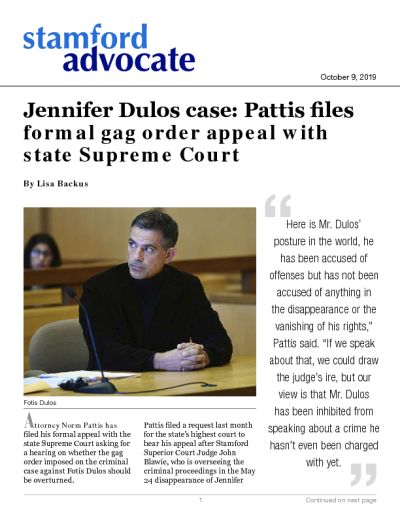 Attorney Norm Pattis has filed his formal appeal with the state Supreme Court asking for a hearing on whether the gag order imposed on the criminal case against Fotis Dulos should be overturned.

Pattis filed a request last month for the state's highest court to hear his appeal after Stamford Superior Court Judge John Blawie, who is overseeing the criminal proceedings in the May 24 disappearance of Jennifer Dulos, granted State’s Attorney Richard Colangelo’s request for a gag order in the case.

Blawie wrote in his Sept. 12 order that “pervasive information or misinformation in the social media age” could prevent a fair trial in this type of high-profile case.

"Here is Mr. Dulos' posture in the world, he has been accused of offenses but has not been accused of anything in the disappearance or the vanishing of his rights," Pattis said. "If we speak about that, we could draw the judge's ire, but our view is that Mr. Dulos has been inhibited from speaking about a crime he hasn't even been charged with yet."

Pattis filed a 12-page brief to the Supreme Court, arguing the gag order has left his client defenseless against police leaks and the intense media scrutiny surrounding the disappearance.

The court granted Pattis' request for an appeal earlier this month.

Pattis will have until Oct. 28 to file his brief seeking to have the gag order overturned.

Scheinblum will have until Nov. 22 to provide a response.

The Hartford Courant also filed a brief in support of Pattis' move to have the gag order overturned, but it was rejected, likely because the state Supreme Court had not yet agreed to hear the appeal.

Blawie intended to limit speech that could affect Fotis Dulos’ ability to have a fair trial. But Pattis is arguing that since it’s Fotis Dulos' Sixth Amendment right to a fair trial, he and his attorney should be allowed to speak.

Fotis Dulos is fielding offers from television shows, Pattis said, and it will be up to his client if he wants to appear.

The judge did not ban all speech in connection with the case, Pattis told Chaz and AJ.

"We cannot talk about the credibility of victims, witnesses or other trial participants," Pattis said.

Pattis is claiming the gag order is a form of prior restraint, which hasn't been viewed in a favorable light by higher courts.

"Punish us after if we said something, but don't ban us from speaking beforehand," he said.

Pattis contends that if the state Supreme Court does not overturn the order, he'll take the case to the U.S. Supreme Court.

The decision on the appeal is likely to set state precedent on how gag orders are handled by trial courts. There is no state case law regarding gag orders, which are rarely issued unless there is a high-profile crime that has drawn intense media attention.

Superior Court judges who oversee criminal cases have relied on federal law to implement gag orders. In his brief supporting an appeal hearing, Scheinblum cited the lack of state law as the reason his office supports the Supreme Court hearing the appeal. However, he said the gag order should not be overturned.

In his order, Blawie specifically cited theories floated by Pattis, such as Jennifer Dulos faking her own disappearance, a la the novel “Gone Girl,” or his suggestion that she might have perpetrated a “revenge suicide” plot. The theories have drawn sharp rebukes from Jennifer Dulos’ family and friends and “Gone Girl” author Gillian Flynn.

“The extent and the nature of the coverage is not merely a result of the public record of the case, but rather, it reflects the tendency of some to fan the flames of publicity by providing the media with salacious, inadmissible, and often prejudicial details.”

Fotis Dulos, 52, and Michelle Troconis, 44, have each been charged with two counts of tampering with evidence and hindering prosecution in the May 24 disappearance.

The charges against Fotis Dulos and Troconis mostly hinge on video evidence of two people resembling them in Hartford the night of the disappearance and of a Toyota pickup truck belonging to a former Fore Group employee that was seen in New Canaan the morning Jennifer Dulos vanished, according to arrest warrants.

The Hartford footage also showed the man who resembled Fotis Dulos dumping bags that were later found to contain his wife’s blood and clothing, arrest warrants said. Fotis Dulos’ DNA was also found mixed with his wife’s blood on the faucet of her kitchen sink, Colangelo said.

The former Fore Group employee whose truck police say was used in connection with the disappearance told investigators Fotis Dulos pressured him into removing the seats and even took the vehicle to be washed and detailed without his knowledge, arrest warrants said. The man turned the seats over to investigators, who found Jennifer Dulos’ blood on one of them, arrest warrants said.

Police said Jennifer Dulos was the victim of a “serious physical assault” based on blood evidence found in the garage of her New Canaan home.

According to the warrants, police believe Fotis Dulos was “lying in wait” when Jennifer Dulos arrived home from dropping off their children at school around 8:05 a.m. on May 24.