Norm Pattis as defense lawyer for Qinxuan Pan: 'How could you not take this case?' 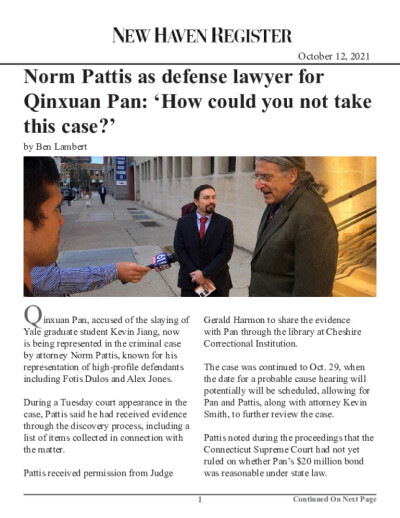 Qinxuan Pan, accused of the slaying of Yale graduate student Kevin Jiang, now is being represented in the criminal case by attorney Norm Pattis, known for his representation of high-profile defendants including Fotis Dulos and Alex Jones.

During a Tuesday court appearance in the case, Pattis said he had received evidence through the discovery process, including a list of items collected in connection with the matter.

Pattis received permission from Judge Gerald Harmon to share the evidence with Pan through the library at Cheshire Correctional Institution.

The case was continued to Oct. 29, when the date for a probable cause hearing will potentially will be scheduled, allowing for Pan and Pattis, along with attorney Kevin Smith, to further review the case.

Pattis noted during the proceedings that the Connecticut Supreme Court had not yet ruled on whether Pan’s $20 million bond was reasonable under state law. Justices began considering that matter during a hearing Sept. 8.

After the court appearance, Pattis questioned the strength of the state’s case, noting that witnesses initially had reported that people of other races were involved in the incident.

“Our view is the case is not as strong as the warrant looks,” said Pattis.

He said he recently had taken on the case. Pattis also had represented Pan at the Supreme Court hearing.

“How could you not take this case?” Pattis said. “The world’s decided he’s guilty; there’s an alternative story.”

Pattis, based in New Haven, previously was described as “Connecticut’s most colorful and controversial lawyer” by Connecticut Magazine, which also is owned by Hearst Connecticut Media.

Fotis Dulos died in January 2020 after being charged with the murder of his estranged wife Jennifer Dulos. Her body has not been found.

In July, a probate judge approved a settlement with Fotis Dulos’ estate that requires Pattis and Smith not to discuss the case surrounding the disappearance of Jennifer Dulos for 40 years.

In the high court case, Pan filed a petition for the court to review the bond — the second offered during the case — arguing his $20 million bond is unconstitutional “in that it is disproportionately high, he has limited financial resources and no international ties, and he has indicated that he is amenable to residing in Connecticut and being subject to electronic monitoring and/or house arrest if released on bond.”

William Gerace, then Pan’s attorney, filed the initial motion for Pan’s bail to be reviewed in June. He has said the $20 million bond, believed to be a record in the state, is too high to be reasonable — an amount “tantamount to no bond at all.”

City police obtained a warrant charging Pan with Jiang’s slaying in late February. The department had named him as a person of interest in the case Feb. 10.

Pan, formerly a graduate student at the Massachusetts Institute of Technology, was not arrested until May 13 in Montgomery, Ala., following a massive search by U.S. marshals and others.

Zion Perry, Jiang’s fiancee, also attended MIT as an undergraduate student, graduating in 2020 with a degree in biological engineering.

Pan was living in Malden, Mass., on the day he allegedly drove to New Haven and killed Jiang.