More than a year after slaying of Yale grad student, suspect Qinxuan Pan’s case winds on 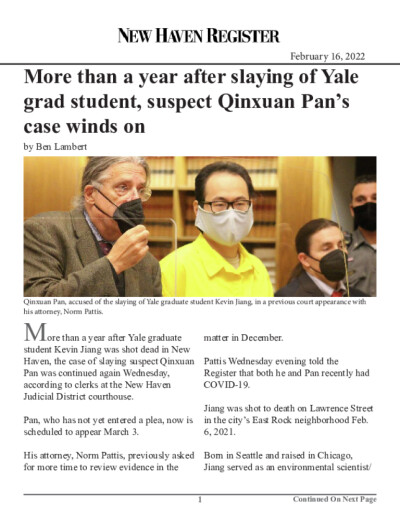 More than a year after Yale graduate student Kevin Jiang was shot dead in New Haven, the case of slaying suspect Qinxuan Pan was continued again Wednesday, according to clerks at the New Haven Judicial District courthouse.

Pan, who has not yet entered a plea, now is scheduled to appear March 3.

His attorney, Norm Pattis, previously asked for more time to review evidence in the matter in December.

Pattis Wednesday evening told the Register that both he and Pan recently had COVID-19.

Jiang was shot to death on Lawrence Street in the city’s East Rock neighborhood Feb. 6, 2021.

Born in Seattle and raised in Chicago, Jiang served as an environmental scientist/engineering officer and tank operator in the Army and National Guard and graduated from the University of Washington before coming to Yale. He was a certified fitness trainer and ran his own studio after serving in the military.

Those who knew Jiang have described him as a person of faith and energy, including his parents, speaking during his funeral at Trinity Baptist Church in New Haven.

Jiang lived “full-heartedly, enthusiastically,” like a “ray of sunlight,” his mother, Linda Liu said. He led his friends and family to faith; he had grown as a person while serving in the military. He was a good communicator; he loved science and nature. He had taken care of her, showing his thoughtfulness, reassuring her about the future, she said.

“Kevin’s life was short but colorful, and brought so much joy, happiness and positivity to those around him,” said his mother. “As a mother, I will always miss Kevin, and treasure the blessings he brought me. Although Kevin is gone from us now, Kevin is the most wonderful gift God has ever given me on Earth.”

His father, Mingchen Jiang, said his son had spoken to him a lot about faith as he walked his journey in life; they grew and matured together.

“I realize, now, that Kevin himself is an angel. His mission to this world is to deliver love,” said Mingchen Jiang. “Love is the word Kevin used most often.”

Jiang became engaged to Zion Perry, also a graduate student at Yale, about a week before his slaying. Photos later emerged online appearing to show Perry and Pan together at a Massachusetts Institute of Technology dance in 2020. Perry and Pan were friends on Facebook, where she posted about the engagement.

New Haven police obtained a warrant charging Pan with Jiang’s slaying in late February. The department had named him as a person of interest in the case Feb. 10.

Affidavit: The guns, cars and DNA that led police to arrest Qinxuan Pan in slaying of Yale grad student.

Pan allegedly stole a GMC Terrain on Feb. 6 and changed his cellphone number before coming to Connecticut, according to a police report from Mansfield, Mass.

According to an affidavit from that community, town officers had received a different description for the New Haven homicide suspect, so they let Pan go.

On the day after the interaction with Pan, North Haven police were called to the Arby’s at 267 Washington Ave., where employees reported finding a bag containing a firearm and ammunition, along with other items, according to the North Haven affidavit.

A preliminary analysis of the cartridge casings found at the scene of Jiang’s death, conducted through the National Integrated Ballistic Information Network, indicated they were associated with four other incidents of shots being fired in New Haven, including one on Osborn Street Feb. 5 and another about an hour before Jiang’s death on Shepherd Street in Hamden on Feb. 6, one in January and one in December, according to an affidavit from New Haven police.

In a request for a search warrant to obtain OnStar data from the Terrain, Detective David Zaweski wrote in the New Haven affidavit that Pan had “rented, and kept overnight,” a different vehicle on the day of each shooting associated with the cartridge casings found at the scene of Jiang’s death.

The Ruger .911 found at Arby’s turned up no NIBIN connection to the cartridge casings found at the scene, according to the New Haven affidavit. Police still were searching for the firearm used in the slaying when the affidavit was written.

Fingerprints determined to match Pan’s were found on the Ruger, according to the New Haven affidavit. Residue consistent with gunfire was found on a yellow coat found at Arby’s.

Pan, formerly a graduate student at MIT, was not arrested until May 13 in Montgomery, Ala., following a search by U.S. marshals and others.

His bail was set at $20 million on May 20 as he was arraigned on a charge of murder.

Pan subsequently filed a petition for the Connecticut Supreme Court to review his bond, arguing it was disproportionately high. Pattis Wednesday noted that they were waiting on that decision. That review, started in September, remains in progress.

Under the state constitution, defendants have the right to be “released on bail upon sufficient security”; the justices considered the meaning of that phrase during a Sept. 8 hearing.

During that hearing, Pattis raised the example of Peter Manfredonia, accused of two killings, kidnapping, home invasion and other crimes, in which bail initially was set at $5 million.

“The Pan family wonders whether this is Yale, the shadow of Yale, cast on the criminal courts,” said Pattis. “Every case involving Yale seems to acquire a special gravitas.”

Senior Assistant U.S. Attorney Timothy Sugrue argued that the court should uphold the bond, which he said took into account the totality of factors, including nature of the alleged crime, the likelihood of flight and the possibility of harm coming to the community, as well as Pan’s alleged resources.

The state is obligated to offer some bond to the defendant, Sugrue said, but in this case believes there is no amount that reasonably could assure he would reappear in court if released from custody.