New Haven attorney Norm Pattis is back representing Texas-based radio host Alex Jones. Pattis agreed to represent Jones, who is being sued by families of those killed in the 2012 Sandy Hook school shooting, in efforts before the U.S. Supreme Court. 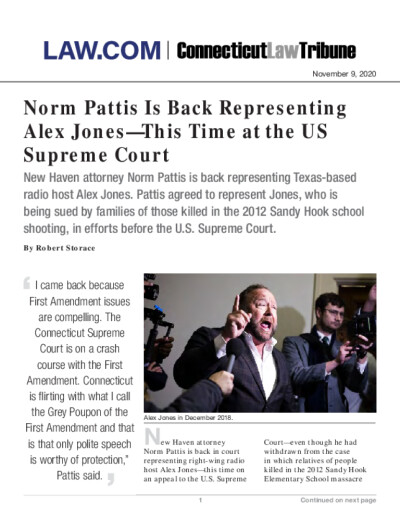 New Haven attorney Norm Pattis is back in court representing right-wing radio host Alex Jones—this time on an appeal to the U.S. Supreme Court—even though he had withdrawn from the case in which relatives of people killed in the 2012 Sandy Hook Elementary School massacre had sued Jones for defamation.

Jones asked Pattis to represent him in an emergency application for a stay involving discovery in the underlying defamation lawsuit. But late Thursday, U.S. Supreme Court Justice Stephen Breyer denied that request.

Pattis said Monday he never gave coming back to represent Jones, who is based in Austin, Texas, a second thought.

The only issue pending before the U.S. Supreme Court Thursday related to staying discovery. But, Pattis said, he’ll now prepare to fie a writ of certiorari related to the crux of the case: A rant Jones went on in 2019 on his show and whether the First Amendment protects it. There is no guarantee the country’s high court will take up the matter.

“The goal of the Sandy Hook parents and counsel is to silence Alex Jones and they will do so through any means possible. The law fim [Koskof Koskof & Bieder] has deep pockets to burn,” Jones said.

The Connecticut Supreme Court denied Jones’ appeal and upheld sanctions against him after he said, referring to the attorneys for the families: “If you want blood, you’ve got it. Blood on the streets, man.”

Sanctions leveled at Jones included barring him from fiing a motion to dismiss the lawsuits.

Pattis said the comments Jones delivered on his radio broadcast were neither “fihting words or threatening.”

In addition to the comments about “blood on the streets,” Jones also maligned Koskof attorney Chris Mattei, one of those representing the families.

InfoWars host, on one of his 2019 shows, had accused Mattei, whose picture he showed on the air, of planting child pornography in email metadata fies sent to the controversial host.

As it relates to Mattei, Jones zoomed in on a photo of the attorney and linked him with the Democratic Party, then used a homophobic expletive to refer to him. Mattei had run as a candidate for attorney general as a Democrat.

Koskof had fied several defamation suits against Jones. It sued on behalf of families of victims of the school massacre as Jones originally said the shooting was a government hoax. He has since walked back those statements.

Mattei, in a statement Monday, said, “Every failed attempt to delay justice by Alex Jones only strengthens the resolve of the Sandy Hook families.”