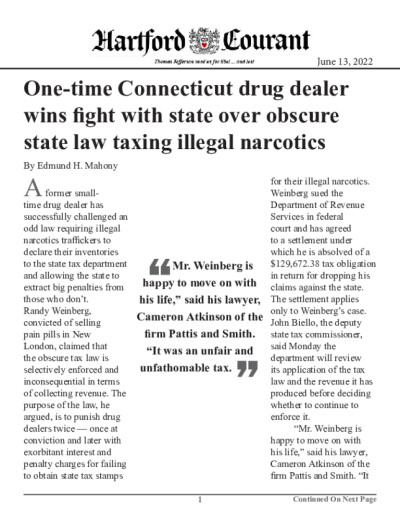 A former small-time drug dealer has successfully challenged an odd law requiring illegal narcotics traffickers to declare their inventories to the state tax department and allowing the state to extract big penalties from those who don’t.

Randy Weinberg, convicted of selling pain pills in New London, claimed that the obscure tax law is selectively enforced and inconsequential in terms of collecting revenue. The purpose of the law, he argued, is to punish drug dealers twice — once at conviction and later with exorbitant interest and penalty charges for failing to obtain state tax stamps for their illegal narcotics.

Weinberg sued the Department of Revenue Services in federal court and has agreed to a settlement under which he is absolved of a $129,672.38 tax obligation in return for dropping his claims against the state.

The settlement applies only to Weinberg’s case. John Biello, the deputy state tax commissioner, said Monday the department will review its application of the tax law and the revenue it has produced before deciding whether to continue to enforce it.

“Mr. Weinberg is happy to move on with his life,” said his lawyer, Cameron Atkinson of the firm Pattis and Smith. “It was an unfair and unfathomable tax.”

The law Weinberg challenged, an “Act Imposing a Tax on Marijuana or any Controlled Substance Produced, Transported, or Acquired by a Dealer,” was enacted by the legislature in 1991, one of a spate of laws enacted in Hartford and elsewhere in the country in response to the drug-fueled violence then tearing up U.S. cities.

Not surprisingly, few, if any, drug dealers bought tax stamps, perhaps because they, like many state and federal drug prosecutors, didn’t know they were under a legal obligation to inform the state about their plans to illegally acquire and sell drugs. Police agencies and prosecutors can refer drug dealers who don’t comply to the tax department, where they can tax assessments eight times the value of their inventories.

That is what happened to Weinberg. He claims his tax obligation — with its wage garnishment, asset seizure and real estate attachment — was so onerous, he couldn’t support himself legitimately after getting out of prison and enrolling in college. Impoverishment, he said, forced him back to drug dealing and eventually to prison — twice.

Weinberg was convicted of a drug offense in 1998 and, while in prison in 2002, learned from the tax department that he was being assessed more than $60,000. Upon release in 2004, Weinberg said in his suit “he attempted to turn his life around, attending college, maintaining a 4.0 GPA, getting a job, and avoiding folks who had historically had a bad influence on him.”

When a wage garnishment left him with less than $200 a week to live on, he said he returned to drug dealing to make ends meet and, predictably, was arrested and convicted again in 2010. By then, penalties and interest more than doubled the tax assessment to $124,344.38.

In his suit against the state tax department, Weinberg argued that the law was drafted more to punish drug dealers than raise revenue and by punishing them twice for the same offense, it violates the Constitution’s protection against double jeopardy.