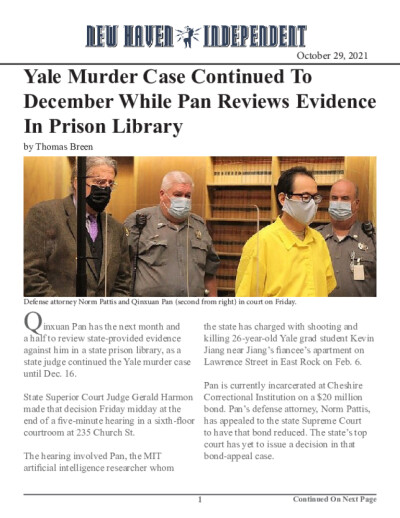 Qinxuan Pan has the next month and a half to review state-provided evidence against him in a state prison library, as a state judge continued the Yale murder case until Dec. 16.

State Superior Court Judge Gerald Harmon made that decision Friday midday at the end of a five-minute hearing in a sixth-floor courtroom at 235 Church St.

The hearing involved Pan, the MIT artificial intelligence researcher whom the state has charged with shooting and killing 26-year-old Yale grad student Kevin Jiang near Jiang’s fiancee’s apartment on Lawrence Street in East Rock on Feb. 6.

Pan is currently incarcerated at Cheshire Correctional Institution on a $20 million bond. Pan’s defense attorney, Norm Pattis, has appealed to the state Supreme Court to have that bond reduced. The state’s top court has yet to issue a decision in that bond-appeal case.

During Friday’s brief hearing before Judge Harmon, Pattis said that the defense has received “discovery from the state, a lot of it,” since Pan was last in court earlier this month. He said he has begun to review that state-gathered evidence, and would like to provide redacted material to Pan for his own review at Cheshire.

“He’s now in protective custody, the sole occupant of his cell,” Pattis said. During an Oct. 12 hearing, Pattis had asked for the evidence to be transferred to Cheshire’s prison library for Pan’s review. On Friday, he said that Pan is concerned that documents in his case might be leaked to the general prison population because the library is staffed primarily by fellow prisoners.

Harmon said his “biggest concern” in the issue of where and how to provide discovery for Pan to review is “that the documents may end up in the general population of corrections, which we want to make sure doesn’t happen.”

He said the state has committed to having someone in the prison library when the documents are transmitted, to make sure that no one else gets to hold or see the documents before Pan reviews them. He said he’s reluctant to issue an order changing Cheshire’s currently prison-level policy of providing documents to prisoners in the library, rather than in their cells.

“Let’s try this first,” Harmon said about having Pan review the files from the prison library. If it doesn’t work out, the court can always revisit the issue.

After the hearing, Pattis fielded questions about the case on the sidewalk outside of the courthouse.

“We’ve begun to review the material, and we’re very encouraged by it,” he said about the discovery provided to Pan’s defense by the state.

What is he encouraged about? “Inconsistencies in the warrant,” he said. “Insinuations, rather than direct proof.”

Most importantly, he said, is the “ID issue.” That is, “there is not reliable identification of the shooter,” according to Pattis’s review of the discovery documents.

Click here to read more about the evidence in the case, as described in various arrest warrant affidavits.